I haven’t been impressed with Portugal this tournament (and not just because I’m a bitter Welshman). They haven’t been very good; never really impressing in any of their matches, winning without dominating in the knock outs and held to draws by Iceland and Hungary in the group stages.

I’m pretty sure they’re the worst European Championship finalists I’ve seen, and perhaps the worst ever. But how can you measure how underwhelming a team is?

I’ve taken every finalist (not including the winner of France vs. Germany, which kicks off about an hour from the time of writing) of the Euros since 1984, which was the first tournament where there were knock-out matches (before that, there was a group stage round-robin and the top two teams played off in a final). I’ve calculated each finalist’s mean Elo score throughout the tournament – not including the final itself – as well as calculating the mean Elo score of all the teams they played along the way. 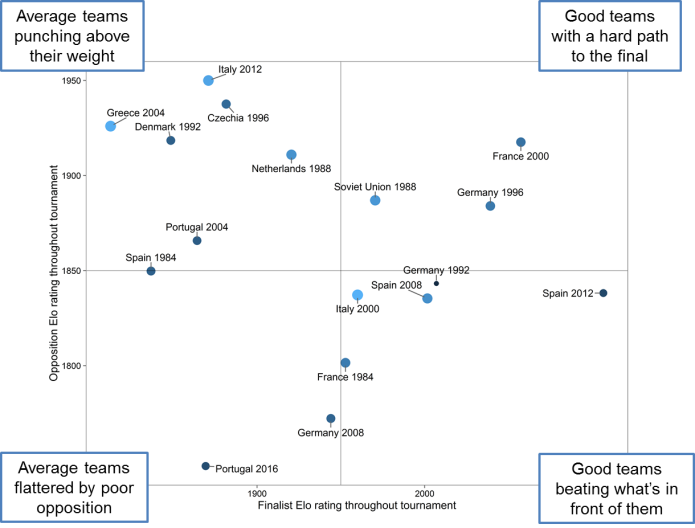 The dot size and colour shows the difference in each finalist’s Elo score from the start of the tournament until after the semifinal;the larger and lighter the dot, the more the team improved on their way to the final.

France in 2000 are probably the best team to reach a final – not only were they an excellent team at the time, they also beat a lot of strong opposition to get there. Spain in 2012 were the strongest team, but the opposition they faced wasn’t as tough. Greece in 2004 were the weakest team, but they beat some really strong teams along the way, which makes their achievement really impressive.

Portugal this year are dropping off the graph on the bottom left. They aren’t a high quality side – barely better than Greece in 2004 or Denmark in 1992 – but they haven’t been beating any impressive opposition either. They’ve not been that good, and they’ve had the weakest path to the final of any Euros finalist.

So, yes, it looks like my hunch was right – Portugal are the most underwhelming team to reach the final of a European Championship ever since there’s been a proper knock-out round. Sorry, Ronnie.

5 thoughts on “Portugal: the worst Euro finalists ever”