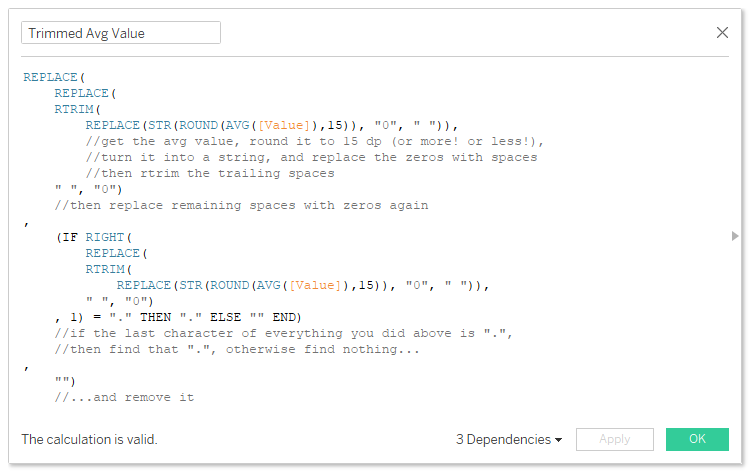 Quite a while ago, I wrote what I thought was a highly-specific blog for a niche use-case – dynamically rounding your Tableau numbers to millions, thousands, billions, or whatever made sense. That ended up being one of my most-viewed blogs.

So today, I’m writing a follow-up. How do you round the number of decimals to a number that actually makes sense?

If you plot this in Tableau, it’s normally enough to set the default format to Number (standard). That gives us this:

But if you don’t like the scientific formatting for Thing 2 and 7 in Type b, you’ll have to set the number of decimal places to the right number. But that’ll give you this:

You can get around this with strings. I don’t use this too often, but it comes in handy now and again. Here’s the formula that you can copy/paste and use in your own workbooks:

Working from inside out, the calculation does this:

And there you go – the number is formatted as a string to the exact number of decimals you’ve got in your Excel file.

Interestingly, there are some differences between the way REPLACE() and REGEX_REPLACE() work. It seems that REPLACE() will wait for the aggregation, rounding, and conversion to string before doing anything, whereas REGEX_REPLACE() will give you the same issues you get as if you just turn a number straight into a string without rounding first.

You can see all this in a workbook on Tableau Public here: https://public.tableau.com/profile/gwilym#!/vizhome/200501stringsandroundaboutspt2/Examples