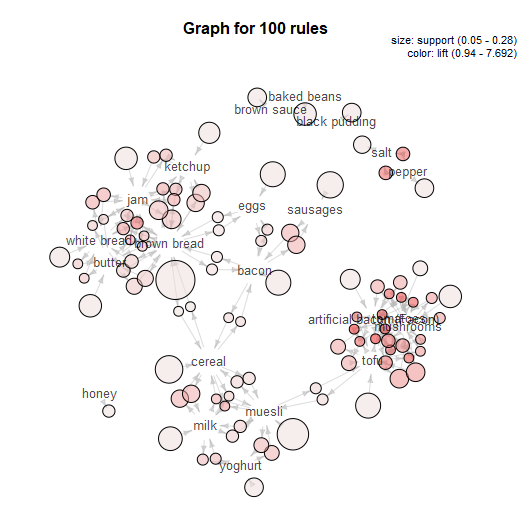 It’s Saturday morning in Gwilym’s Breakfast Goods Co., and people are slowly rolling in to buy their weekend breakfast ingredients (we don’t sell much else). The first five people through the door make the following purchases:

I’m looking at my dataset here, and I can instantly see a couple of insights. Firstly, that’s a lot of rich beef sausages we’re selling. And secondly, people seem to buy sausages and baked beans together.

An association rule is the name for a relationship between items or combinations of items across all transactions, and it’s often written like this:

This means “if people buy sausages, they also buy baked beans”, and we can see that this association rule figures pretty prominently in this dataset. But an association rule is just the name for the relationship, not a statement about the strength of it. For example, milk → sausages is also an association rule, even though there’s only one transaction where that happens.

So, if we use the rule sausages → baked beans , the confidence is 0.75. This is because it’s calculated like this:

Finally, lift is how likely two or more things are to be bought together compared to being bought independently. It’s calculated like this:

Unlike confidence, where the value will change depending on which way round the rule between two items is, the direction of a rule makes no difference to the lift value.

Again, if we use the rule sausages → baked beans , the lift is 1.25. This is because it’s calculated like this:

That’s pretty much it for the theory so far, so let’s create a simple analysis in Alteryx. You’ll need two tools – MB Rules and MB Inspect.

MB Rules does all the work, and it’s where you set your support and confidence thresholds. However, it only outputs an R object, which Alteryx can’t read as a standard data frame… so you need MB Inspect, which is basically a glorified filter tool, to turn that into Alteryx data.

You can set it up a little like this:

You’ll also want to sort out your data beforehand. There are two possible ways you can structure your data for the MB Rules tool to work. You can either have a row for every single item of every single transaction, or you can have a row for every transaction, with each item separated by the same character. The MB Rules tool can handle both structures, and you’d set it up as follows:

In the MB Rules tool, let’s set it up to give us the association rules, with their support, confidence, and lift. You can do that by selecting Apriori and Association rules under method to use:

Onto the MB Inspect tool, and I normally leave it like this – zeroes for everything, because I’ve set most of my filters that I care about in the MB Rules tool.

That’s pretty much it, so I’ll now press run. For this data, I’ve expanded my dataset from the first five transactions to a hundred transactions. Here are the association rules in my dataset:

Remember I mentioned empty rules earlier? The top handful of rows where the LHS column is “{}” is what I mean. What this shows is the association rule, if you can really call it that, for items individually, totally independent of other items. This just shows the support for an individual item, and because it’s independent of other items, the confidence is the same, and the lift is always 1.

That’s basically it for a simple market basket analysis. The MB Inspect tool does also generate some graphics, which I don’t normally use that much, although I do like the network graph it makes:

That’s the main way of doing market basket analysis in Alteryx, and it’s what I do most of the time. But there are several other options, so let’s explore what they do as well.

In the same Apriori section, there’s an option to look at Association hyperedgesets:

What this does is basically to average across both sides of an association rule. It gives you the same support, the same number of associations, and the average confidence for both sides.

You can see that in the output below.

To explain, let’s take the mushrooms/tofu relationship again. This time, it doesn’t list an association rule – all you can see is the two items together in one set, ordered alphabetically, like {mushrooms, tofu}.

You can see that the support here (0.12) is the same as the support for both association rules (0.12). However, look at the confidence. And when I say “confidence”, I mean the field called NA.

In any case, here’s the hyperedgeset results for the five-transaction dataset:

Thought we were done with theory? Surprise! Here’s a nice little bonus bit, because to cover the other options, we’ll need to talk about sets and supersets.

This diagram shows every single superset of {sausages} and {sausages, baked beans}:

This one is nice and straightforward – it’s simply sets of items which occur above your defined level of support. So, for example, if you set 60% as your minimum level of support, then the definition of frequent itemsets is all sets of items which occur in 60% or more of transactions. In our case, that’s {sausages}, {baked beans}, and {sausages, baked beans}.

In our five-transaction example, here are some possible frequent itemsets:

Setting the frequency yourself might make it feel like a bit of a circular analysis – “I want to know what’s frequent, so here’s my definition of frequent” – but it’s pretty useful all the same, because every organisation’s data is different. What counts as frequent in a specialist shop might be way higher than a giant supermarket, so this allows you to tailor your analysis differently.

Similarly, {milk} is a closed frequent itemset because it occurs twice – that’s frequent according to our 40% definition, and that’s more frequent than its supersets, {milk, cereal} and {milk, sausages}.

However, if we increased the minimum support to 0.6, or 60%, then {milk} would no longer be a closed frequent itemset – even though it still fulfils the closed set requirements by being more frequent than its superset, it’s no longer frequent by our definition.

…but again, this is because of our preset definition of frequent. If we changed the minimum support for frequent itemsets to 70% rather than 60%, then the set {sausages, baked beans} would no longer be frequent, so {sausages} would be a maximally frequent itemset.

Now that we’ve seen the theory, it’s really quick to run these analyses in Alteryx.

You may have noticed that there are two different ways of running a frequent itemsets analysis – one under the apriori method, and one under the eclat method. The only difference is the search algorithm used. The two methods return exactly the same results (well, almost – the order of items with the same NA and Support is slightly different, but that doesn’t actually matter, and the results don’t join up perfectly, but that’s because of joining on a double, so they do join up perfectly if you convert the NA columns to Int16 or something). From what I can tell/from what I’ve googled, the difference in the search algorithms is that apriori scans through the data multiple times, which makes eclat slightly faster for larger datasets. In my dataset of 100 transactions, it made absolutely no difference to the speed.

So, we can set up the eclat frequent itemsets analysis up like this:

Eagle-eyed readers may have noticed that the output of the eclat frequent itemsets analysis is the same as the apriori hyperedgesets analysis, but without the average confidence column. And it is, but it does run a little quicker.

Onto closed frequent itemsets – if we set up the tool like this:

At first, this looks identical to the output of the frequent itemsets analysis, but that’s only because I’m screenshotting the first few rows. There are less than half the number of itemsets returned by the closed frequent itemsets option.

Finally, let’s look at maximal closed frequent itemsets. Again, we’ll set it up like this:

…and again, here’s the output:

This output structure is identical to the other two, but the results are more noticeably different. The honey/muesli/yoghurt combo is the most frequent maximally frequent itemset.

I’ve written about applying market basket analysis to your data before, and this has turned into a really long blog post, so I won’t cover it in full here. But, as a shop keeper, I’d use the results of this analysis in Gwilym’s Breakfast Goods Co. to explore what to put on sale together, what not to put on sale together, and so on. For example, mushrooms and tofu are the combination with the highest lift, so if I’d accidentally overstocked on tofu and needed to sell it off quickly, I’d put it on special offer with mushrooms and put it in the vegetable (or fungus-pretending-to-be-a-vegetable) aisle. But if I’d done my supply chain planning well, I could use the strong association between mushrooms and tofu to get people to buy other things. For example, people who buy tofu also buy artificial bacon (Facon), so I could use people’s tendency to buy tofu and mushrooms together by putting them in the same aisle but sandwiching artificial bacon (Facon) between the two. This would mean that people looking for the tried and trusted mushroom/tofu combination are going to be looking at artificial bacon (Facon) at the same time, and hopefully they’ll pick it up and try it out.

One thought on “Market Basket Analysis in, but not limited to, Alteryx”