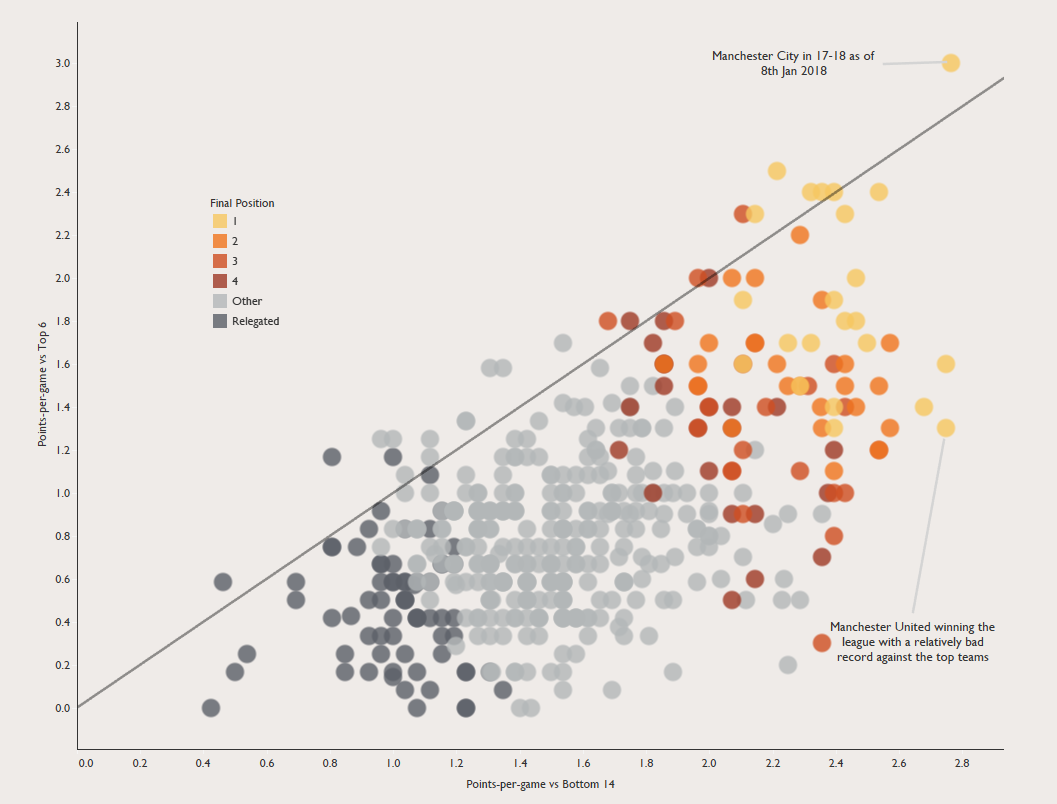 This is my first football data blog for a while, and I feel all nostalgic! It’s nice to dive into some league table data again, and even nicer now that I have Alteryx; I was able to format my data about 10x quicker than I was in when I first started doing this in R. Then again, I’ve probably also spent 5x more time using Alteryx than R in the last year or so. Anyway.

I’ve started looking at how the Top 6 sides in the Premiership perform each year (using data from this fantastically well-maintained repository), and there’s quite a few interesting stories in here. The first main point is that the big clubs are accelerating away from the rest of the league. The second main point is that any big six mini-league doesn’t really matter, as you can win the Premiership with an underwhelming record against your main rivals if you trash everybody else. I mean, that shouldn’t be much of a surprise – if you’re a Top 6 team, only 30 points are on offer from matches against your rivals, but you can potentially take 84 points from the 28 matches against the rest of the league.

For all these analyses, I’m taking Top 6 literally – meaning the teams that finish that season in the top six positions. Nothing to do with net spend, illustrious history, shirt sales in Indonesia, or anything like that. I then look at the average points-per-game changes by team, position, season, and Top 6/Bottom 14 status. I also filtered out the first three seasons of the Premiership to keep it slightly easier for comparison, since there were 22 teams in the league until 1995-96.

When plotting the average points-per-game per season between the two groups, a clear trend emerges; the Top 6 are better and better at beating the rest of the league: 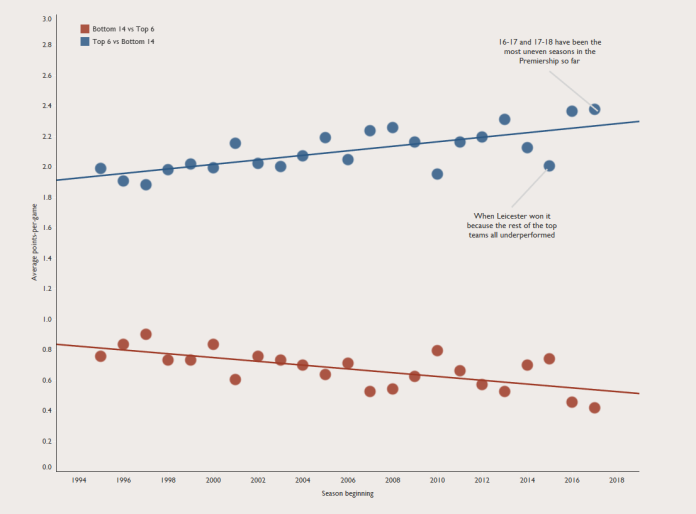 However, this trend appears to be asymmetrical. When looking at the overall average points-per-game for all games across the season, teams that finish in the Top 6 are getting better, but there’s only a negligible decline for the rest of the league. This suggests the bigger, better teams are pulling away from the rest of the league: 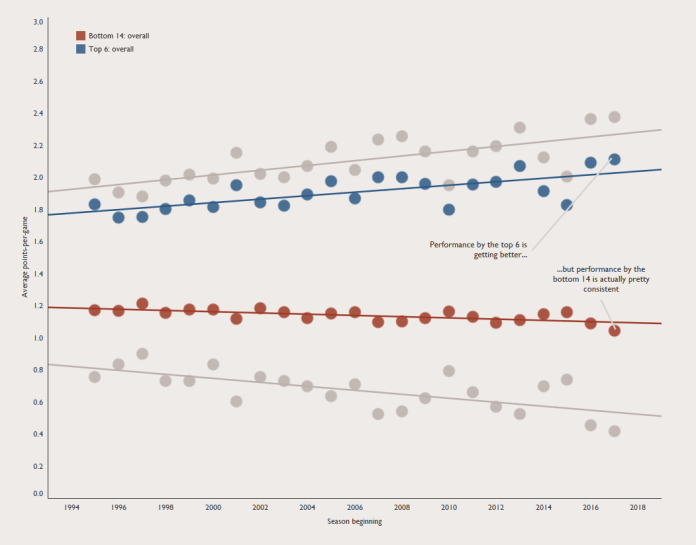 This effect is most striking when plotting the difference in overall average points-per-game between the two groups: 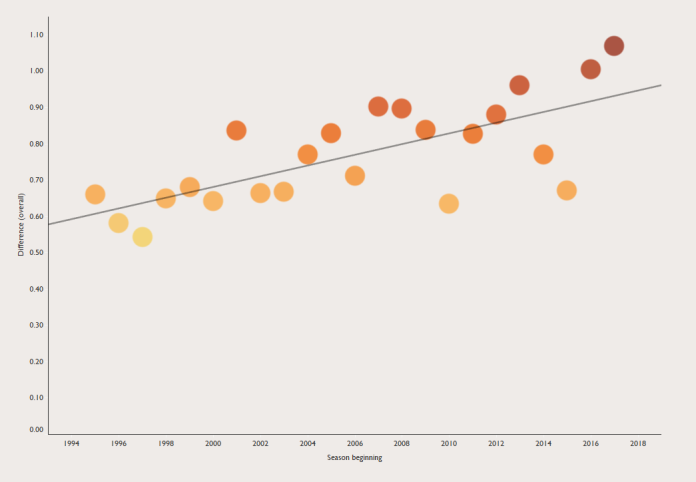 Teams finishing in the Top 6 scored around 0.6 points-per-game more than the rest of the league in the early nineties, but that’s now up to over 1 point-per-game in the latest couple of seasons. That half-a-point difference translates to a 19-point difference across a whole 38-game season.

We can plot each team in each season of the Premiership (since 1995-96, when the league was first reduced to 20 teams) and look at how well they did against the top teams and the rest of the league. In this graph, the straight line represents equal performance vs the Top 6 and Bottom 14: 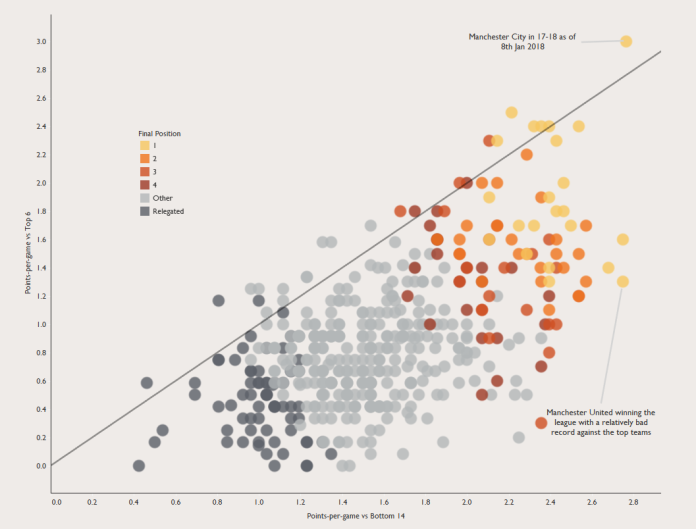 A couple of things stand out:

1. Only a handful of teams have ever done better vs. the Top 6 than the rest of the league. This seems to have no effect on final position.

2. It’s possible to win the league with a poor record against the Top 6 by consistently beating everybody else. Manchester United won the league in 00-01 and 08-09 with only 1.3 PPG vs the Top 6.

3. Manchester City this year are ridiculous.

I find it interesting to compare Liverpool and Arsenal over the years. One narrative I sometimes hear is that Liverpool tend to raise their game for big matches, but are too inconsistent the rest of the time, whereas Arsenal struggle against big sides but do well enough in the rest of the league to consistently finish well. This chart seems to bear that analysis out; Liverpool’s cluster of dots are higher on the chart, but further to the left: 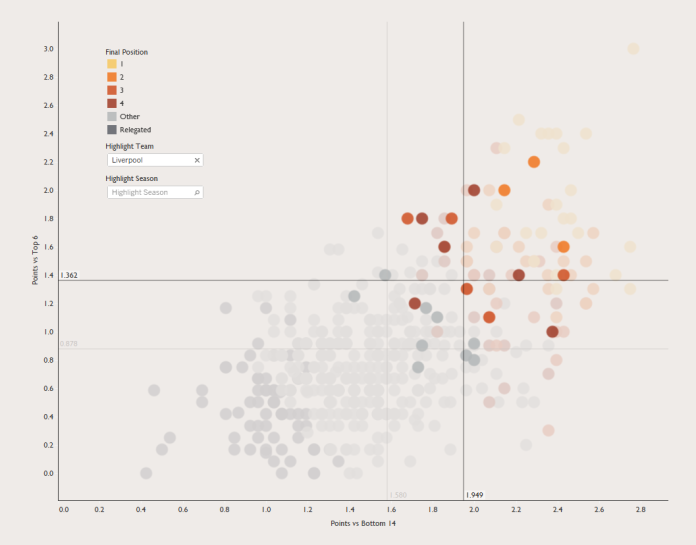 …while Arsenal’s cluster is slightly lower but further to the right… and most importantly, more colourful: 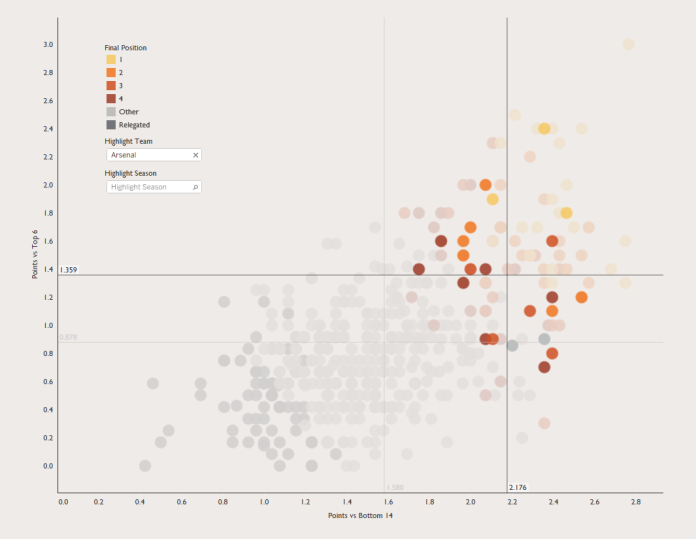 And if you want to explore other teams and seasons, there’s an interactive version of all these graphs here.